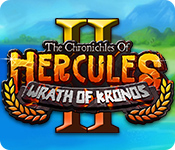 The Chronicles of Hercules II: Wrath of Kronos

For years, the gods of Olympus have ruled freely over the world, enjoying peace and prosperity without enemies strong enough to oppose them. However, an unexpected threat now puts Olympus in grave danger. The Titan Kronos has broken free from Tartarus and raised an army of giants to attack Olympus and defeat the gods! The prophecy says the great hero Hercules will be able to turn the tide of battle and defeat the giants... but will his strength be enough to stop the wrath of Kronos?