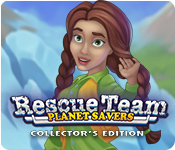 Alawar Entertainment delivers another exciting addition to the enduringly popular Rescue Team series! When global warming unleashes a rash of natural disasters, the Rescue Team swoops in to help! Race against the clock to deploy helicopters to rescue stranded tourists, send rescue dogs to save people from drowning, and dispatch firefighters to extinguish burning buildings. Gather resources to rebuild hospitals to help the injured and prisons to hold the thieves that threaten to make a bad situation even worse! From scorching deserts to frozen frontiers, each beautifully animated setting will bring you closer to the final challenge in which the fate of the world rests in your hands in this pulse-pounding new time management game! This is a special Collector's Edition release full of exclusive extras you won’t find in the standard version. As a bonus, Collector's Edition purchases count toward three stamps on your Monthly Game Club Punch Card! The Collector’s Edition includes: