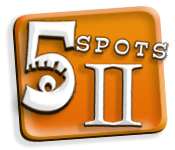 The sequel to the world's favorite spot-the-difference game, 5 Spots II is one of our most popular games; it simply must be played to be believed. The list of enhancements is incredible. Now there are four game modes, not simply variations, but original and very hilarious games in their own right. Whether or not you were acquainted with the original 5 Spots, there is something here for you. Download today and find out what that something is.